It took all of my will power last night not to stick my finger in the frosting of a cake. I don’t really even like cake. In fact, if you put a vanilla cake with vanilla icing in front of me a month ago, I would have said “no, thank you.” Chocolate cake is a bit of a different story, but even then, it is not my favorite dessert (ice cream). Last night, Michael & I went over to my friend Erin’s house to watch the Tech vs. TCU game. When we got there she had cooked pork tenderloin, mac & cheese, salad, and cheese bread. Other than salad, none of these things are my favorite foods. I’ve never really liked pork tenderloin, even though my dad made his stuffed; I did like it when it was battered and fried at home though. Mac & Cheese has always been my enemy because I can’t make it. It seems super easy, I just can’t do it. It always comes out weirdly liquid or overly cooked? Then there is bread. I hate bread. I hate bread soooo much. I wouldn’t even touch bread until I was 18, and I had to eat something on volleyball trips. Secret: I have never (ever) eaten a roll (ever). The point is, last night I wanted to try all of these things (not the bread)! It is the idea that you cannot have something that makes you want it. Skinny Bitch addresses this issue and says (something to the effect of) you can have it, you choose not to, and that is how you overcome the urge to eat it. I would tell you more, but I let a friend borrow my book so she could read about the horrors of cheese (she’s already vegetarian).

Anyway! Instead of eating all of those things, which contained something I did not want to consume, I made vegan nachos! I looked at a bunch of recipes, but in the end I used what I had in my kitchen, plus a few extra ingredients from Whole Foods! They turned out really well! (All Ingredients = Organic) I used Amy’s Low Sodium Medium Chili, Pinto Beans, Black Beans, Corn, Red Bell Pepper, and a vegan taco mix from WF veggie section which had onions, cilantro, and other goodies. I cooked the chili, beans, and corn together, put it on top of chips, then the veggie mix, then the vegan cheese, then the bell peppers. I used a vegan cheese that I had heard is to die for, and it was delicious. 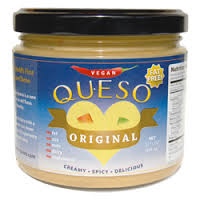 After nachos, I wanted cake. I did not have cake, but I wanted cake. So I thought I would add a few vegan cake recipes on here so that next time I can make my own cake to bring!

Please Let Me Know What You Think! I Love Comments! Cancel reply